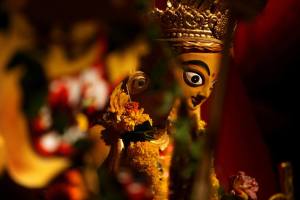 When cottony clouds float in the vast bluesness of the sky, when Kans grass (Khash Phool) starts dancing with the alluring breeze, when the cuckoo starts singing in a distant meadow, its known that the festive season has arrived. For Bengalis Sarat (autumn) means Sharodutsab (Durga puja). However Durga puja is not just a festival of joy and gaiety. It’s an intricate portrayal of the rich culture and literature of the state and beyond. The depiction may be in the form of colossal pandals, astounding idols or different ways of exhibiting the art. Durga puja is a state of mind, it’s an entire season of free spiritedness.

For most Bengalis Durga Puja is synonymous to Kolkata and there are abundant reasons for that as well. The city of joy indeed has an aura of its own, inspite of many odds and adversities. As the festivities cast its spell on my city, its transformation is indeed note worthy. All decked up like a new bride, the city compels you to notice and appreciate her beauty.  When the darkest corners of the city get illuminated, and radiate vibes of happiness, togetherness and gratification! I, like most Bengalis always preferred to pay homage to Ma Durga on the known grounds of my parar (colony’s) pujo in Kolkata. Celebrating festivals in the company of the closest and the dearest always is an add-on. So Kolkata always attracted me especially during Pujas.

However, last year for the first time, my husband and I decided to spend the Pujas in Mumbai and experience what Mumbai meri jaan had to offer.

A few months before our Sharodutsab, we associated ourselves with “SPANDAN FOUNDATION” a Powai based social association mostly consisting of Bengalis in Mumbai. A group of enthusiastic people with a cultural bent of mind, who wanted to celebrate the occasion, but with a difference. Keeping intact the spirit, this is contributed by certain ritualistic but important ceremonies, the smell of new clothes, the cultural programs and even the aroma of Bengali street food.  But then, where, was the difference?

Worshiping Ma Durga is like worshiping the never defeating spirit of womanhood.  Ma Durga symbolizes the power and enormity of a woman, a woman of substance. Whose external attractiveness is insignificant when compared to her inner strength, the greatest evil stands no chance in front of her immensity.

In a time, when the nation is getting asphyxiated with the spreading disease of crime against women, SPANDAN thought of using the platform of Durga Pujo, to empower them. “Women Empowerment” was chosen as the theme of our pujo. The theme echoed through the pandal, the programs conducted and in every other possible manner. The pandal interior was done with the stories of exemplary women, who made it large fighting humongous odds. 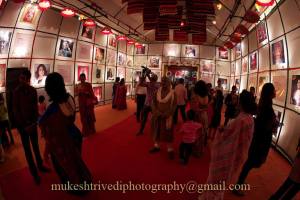 However along with addressing a burning social issue, spandanites kept the exuberant festive mood alive. Every morning and evening during the festival, witnessed ebullient men and women cladded in their ethnic best, from ethereal dakais to graceful kanjivarams, you could find it all. Pandal hoppers pouring in, in increasing number each day, happy faces, moms holding tightly to the hands of their little ones, teenagers exchanging admiring glances, couples reliving their teen age days!  People gorging on famous lip smacking Bengali street food, who cares for dieting, afterall Durga pujo celebrations remain incomplete without a mouthful of chicken rolls and mughlai parathas!!

Amidst all the wonderful things happening around me, cultural programs intimidated me the most.  I enacted in a drama staged on Nabami, after a very long gap. My husband played the male lead opposite me. “Nath Jamai” was a laugh riot; all the characters were portrayed in the most chucklesome manner and it was real humor creating the magic on stage.  The drama got appreciation, not only for the way it was portrayed, but for the effort that went into portraying it.  I still remember and cherish the days, when all of us used to run for the rehearsals after office and returned home damn tired at 10:00 in the night, only to have a quick dinner and jump to bed!! Our rehearsals continued for more than a month and it’s heartwarming to know that most people could see and recognize that hard work. 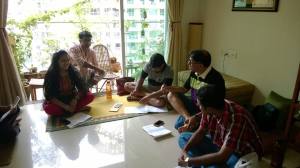 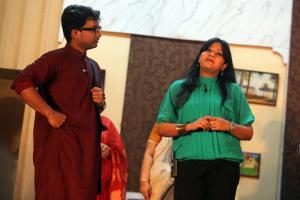 Rehearsal also created loads of memories, the Cha (Tea) Singhara sessions, occasional giggling, appreciation and scolding from Sumit da, Rakhi di’s exemplary acting skills, Deepa di’s iconic “Baba!!”, Snehasis’s encouraging enthusiasm, Indraneel da and Prosun da’s effort to balance all the responsibilities and yet pull off two most important roles with ease and excellence, Arnab da’s convincing drunken act, Krishnendu’s sneezing spree and “machima!”, Jayanta da and Subhendu da’s fun act, Avishek’s strange interest of giving proxy for others and my effort to portray someone opposite my nature,   I enjoyed and lived it all!! 🙂

Dashami morning dawned with a strange emotion of dismalness. Yearlong awaited festivities have come to an end. Ma Durga has completed her annual visit and is on the verge of starting her journey back to Kailash!! With a heavy heart we have to bid her adieu, only to wait for her grand return the next year. The return that will free us of all shackles and intoxicate us with free spiritedness, forgetting all upsets and downfalls, we will regain life.

The celebrations which had started with bringing the goddess to the pandal, unveiling her majestic self, paying homage to her had ended with “Asche bochor abar hobe!” (We will celebrate your decent from heaven again next year)!! However a strange emptiness filled our lives for the next few days, life was centered on Durga Puja celebrations for a long time. The hectic schedule which sometimes left me infuriated and complaining about the fast Mumbai life was suddenly missed. How much I wanted my racing life back!!  The city which was alien to me suddenly emerged as my home away from home; I realized that I had many people to count upon, and that’s the real purpose of any festival, “Binding everyone together”. In an era when everyone wants to reach the summit of success, many a times compromising on humanitarian relationships, festivals like this leave us thinking on how life should actually be perceived and lived!!

Thank you Spandan!!Thank You Mukesh Ji (Mukesh Trivedi )and Debi SenGupta for the awesome pics…

4 thoughts on “Unveiling the Goddess With Spandan!!”